Early on, Pittsburgh diocesan priests recognized that health care was a major concern when caring for the poor of Chimbote.

The Chimbote Foundation was created to provide a bridge of love, hope, faith and financial support to care for the poorest of the poor in Chimbote through the Center for Social Works – a maternity hospital, outpatient clinic, clinical laboratory, pharmacy and home for abandoned and neglected children – serving hundreds of thousands since the mid-1960s.

The Pittsburgh presence in Chimbote was first manifested when the Diocese of Pittsburgh began to build a bridge of love and hope between the people of Pittsburgh and the needy in Chimbote, Peru. Bishop John Wright, Bishop of the Diocese of Pittsburgh at that time, was the first architect of this bridge, and commissioned Father James Shanahan to be the first bridge builder in Peru, as the first Pittsburgh diocesan priest to serve there in the St. James Society. The work in Chimbote was originally purely parochial. Father Shanahan and other priests who followed soon after – Father Jules Roos, Father Gerald Lutz, and Father John Price – were the founders, the pioneers who laid the foundations for the bridge in Peru. Other priests who served in Peru were Father Robert Boyle, Father Matthew Cirilli, Father Thomas Kredel, and Father Albin McGinnis. Father Roos was assigned to a parish recently begun by Father Ray Moore, another St. James priest from the diocese of San Diego, California. This parish plant was put on a large tract of land originally designated as a home for the aged. It housed about 20 elderly and abandoned men and women from Chimbote’s slums and became the responsibility of the priests, thus planting the “seed” for what was to become the future Center for Social Works. Early on, the priests recognized that health care was a major concern when caring for the poor of Chimbote. 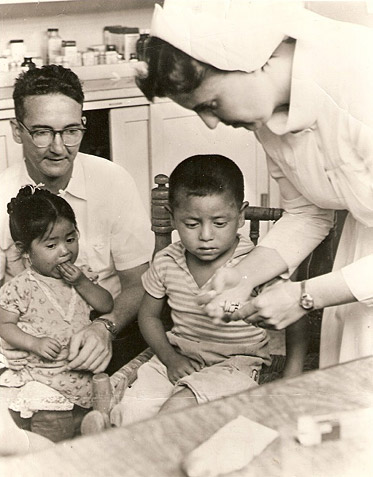 Monsignor James Shanahan and Sister M. Benedicta, RSM, were among the first missionaries from the Diocese of Pittsburgh serving the healthcare needs of the families in Chimbote. They are seen here providing inoculations circa 1965.

A small three-room medical clinic was opened to provide care for the migrants moving into Chimbote’s swelling slums hoping to find employment in the rapidly developing fish meal industry. The clinic, funded by personal donations from the priests and their friends, was ill-supplied with equipment, medication and trained staff. It had only the services of a volunteer doctor restricting service to about 15 patients each day.

The intolerably high infant mortality rate led the priests to search for a way to establish basic maternity care. Since four Dominican Sisters from Grand Rapids, Michigan, were already working with the priest of the parish in the catechetical programs, it was decided to solicit their religious community for two trained midwives to stem the tide of the existing infant mortality and maternal deaths. Their request was accepted and two registered nurses were prepared in midwifery to take on this task. Father Roos and Father Moore were tireless in their faith and conviction to seek funding options for a maternity hospital.

Sister Margaret Mary Birchmeier and Sister Innocence Andres, having completed their midwifery training, arrived in Chimbote in September of 1965 and found only a cement floor slab and one wall standing for what was to become the maternity hospital. They developed a home delivery and prenatal program while waiting for the funding necessary to complete an inpatient maternity hospital. A small outpatient clinic service was also begun. 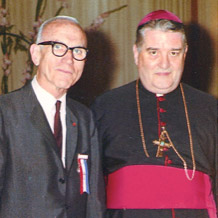 Mr. James J. Ferry, a Pittsburgh businessman, visited Chimbote and was moved by the needs and impressed with the struggling efforts on the part of the priests and nuns. Upon his return to Pittsburgh, with the blessings of Bishop Wright, he promoted a mission support dinner, first known as the Chimbote Dinner, and later as the annual Peru Mission Dinner, an effort that continues to the present day.

The sharp increase in maternity patients led to the solicitation of a commercial washing machine and extractor from Catholic Relief Services.

Sister Lillian Bockheim, another Dominican Sister and nurse, arrived in Chimbote in July, 1967. Increasing patient numbers also required adding a nurse’s aide, a local midwife and a full-time paid doctor. Increasing maternity and outpatient needs also necessitated the search for the services of a clinical laboratory.

Sister John Cassian, a Sister of St. Joseph and laboratory technologist, was recruited to organize an on-site laboratory.

A dental clinic began with a grant from the H.J. Heinz Company of Pittsburgh. The dental clinic was discontinued five years later because funds were more needed to address growing demand in the outpatient clinic.

A devastating earthquake destroyed the maternity hospital and caused severe damage to the outpatient clinic and the sisters’ house. It completely demolished the home for the aged. Sister Edith Mary was tragically killed inside one of the buildings and Sister John Cassian was severely injured. Reconstruction seemed financially impossible, however, patient numbers did not dwindle and makeshift chipboard buildings were erected. It was ten years before enough funds were accumulated to begin construction on an expanded and permanent facility.

On July 1, 1971, the San Martin Laboratory opened its doors and began serving the needs of the Center. It was opened to anyone in Chimbote that needed this service. There was no other laboratory service available to the poor in Chimbote. It was named in honor of Saint Martin de Porres, a Peruvian saint whose life was dedicated to serving the poor.

In the years following the earthquake, times were very difficult. With perseverance, faith, and hard work the clinic and lab continued to serve the poor.

During these years, through the dedicated and devoted work of Monsignor Roos, Sister Margaret Mary, and Sister Lillian, the Center realized a certain financial stability. Patient numbers began to grow again and a well baby clinic was added to address the concerning newborn and infant mortality. Construction was begun on a permanent replacement facility with the funds raised since the earthquake, and with careful planning.

A post-partum clinic was established in December, 1978, to provide better follow up for mothers.

A Marxist social reform movement, known as the Shining Path, began to take hold in Peru. This terrorist organization was widely condemned for its brutality, including violence deployed against peasants.

Increasing numbers of maternity patients continue in these years.

A visit from Derek Worlok, the Archbishop of Liverpool, England, brought funds from the English Catholic Bishops’ Fund for the construction of a special care unit for high-risk infants.

An all-purpose hall was constructed to use for maternal and child care education, and to provide space for a library, meeting place and chapel.

Expansion of the outpatient clinic and laboratory was essential due to increasing numbers. Staffing, programs and services were added to include rehydration/malnutrition services, minor surgery, blood transfusions, vaccinations and pap smears.

In 1991, Bishop Donald Wuerl visited to celebrate the 25th anniversary of the maternity hospital. Impressed with what he saw, he returned to Pittsburgh with the idea to establish a foundation to provide ongoing funding for the center. The Chimbote Foundation of the Diocese of Pittsburgh was formed.

In the same year, the Shining Path terrorists began activity on the coast. Chimbote was chosen as one of its targets. They martyred three young Franciscan priests in the outlying towns near Chimbote. One additional priest was targeted, severely wounded and under treatment for years. It was a movement that paralyzed anyone involved in social services. Monsignor Roos and the sisters quietly moved along with the services, but with caution and discretion.

In 1992, the government captured and imprisoned the leadership of the Shining Path, returning Peru to political stability.

The Chimbote Foundation identified urgent needs for the center and expansion continued.

The center was petitioned by the local orphans court to assume the care of the increasing numbers of abandoned newborns during their first years of life.

Physical and speech therapy, growth and development programs and Lamaze classes were added. A fetal monitor, an ultrasound machine and an infant respirator were purchased.

Department of pathology was opened by a regionally respected physician, Dr. Cesar Caceres, who later became director of the laboratory.

A new facility was constructed for the care of abandoned newborns and toddlers.

A second ultrasound machine and new infant incubators were purchased.

The physical therapy department was expanded to provide services for adults and children. A nutrition expert, a psychologist and an ophthalmologist were added to the staff.

The laboratory added equipment and a computer system to provide the staff with more immediate results. Fetal monitors and infant warmers were purchased.

An auxiliary was formed to provide help for the Abandoned and Orphaned Children’s Unit.

On February 16, 2013, Monsignor Jules Roos, founder and spiritual guide for 47 years, was called home to God. He was buried among his adopted families – the poor of Chimbote. Fresh flowers are brought to his grave daily. Following his funeral, Cardinal Donald Wuerl wrote to express his condolences to Sister Margaret Mary and Sister Lillian: “When I think of Chimbote, I think of the little Trinity – the both of you and Monsignor Roos.”

Mrs. Teresa Salinas, a local Chimbotean who served alongside Monsignor Roos for more than three decades, was selected to succeed him as director of COS/Maternidad de Maria.

Bishop Francisco Simon Piorno, on July 5, 2015, dedicated the Padre Julio Roos Children’s Center. This was done to recognize that he was the founder of the Center for Social Works – Maternidad de Maria so that his memory lives on in the city of Chimbote and also because it was he who opened the first shelter for abandoned children.

In anticipation of the 50th annual Peru Mission Dinner in October, 2015, plans were formed for a complete renovation of the outpatient clinic, including adding more clinical services such as cardiology, dentistry, traumatology, ophthalmology and neurology, as well as mammography and radiology.